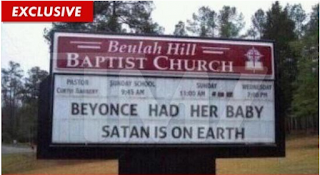 Blue Ivy Carter hasn't been on Earth a week yet, but already people are giving the baby to the devil. First numerous reports falsely claimed Blue was named after Satan's daughter, a figure who doesn't even exist. Now, someone vandalized a church in the name of Beyonce and Jay-Z's daughter. Someone switched the sign at Beulah Hill Baptist Church to read, "BEYONCE HAD HER BABY SATAN IS ON EARTH" The pastor at Beulah Hill Baptist in West End, NC claims he discovered the vandalism yesterday after receiving numerous complaints from locals - and removed it immediately. The pastor insists the church had nothing to do with the apocalyptic message, it was simply the victim in a random act of mischief. Tell the truth, shame the devil, but in the words of Jay-Z, the church needs more people! Read more: http://globalgrind.com/entertainment/blue-ivy-carter-church-satan-devil-antichrist-illuminati-details#ixzz1jD76uuR6
Reactions: