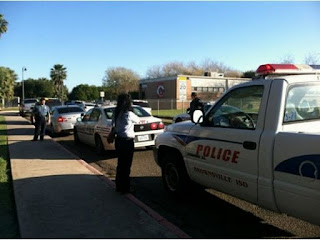 Police in Brownsville, Texas shot and killed an armed 15-year-old 8th grader in the hallway of his middle school. Police reported to the school at 8 am this morning after they received word that there was an individual with a weapon at the Cummings Middle School. Police found the student with a handgun in a hallway and shot him. The student was later taken to Valley Baptist Medical Center in Brownsville where he passed away from his injuries. According to the Brownsville Herald, one additional student was detained for questioning. The school was placed on lockdown and no other students were injured. A school administrator apparently noticed the student carrying the gun and called Brownsville and school district police, Trevino said. He said investigators hadn't determined whether the student fired any shots, and he said he had no information on why the student might have had the gun on him. "It's still under investigation, as far as how he came about to bringing the weapon or if he encountered anybody or anything else," Trevino said. Stay tuned for more information as it comes available. Police cars sit outside of Cummings Middle School Wednesday morning Read more: http://globalgrind.com/news/police-shoot-and-kill-armed-8th-grader-texas-middle-school-details#ixzz1iXx4gl3v
Reactions: